Vickie Guerrero and Ricardo Rodriguez get into a heated exchange:... 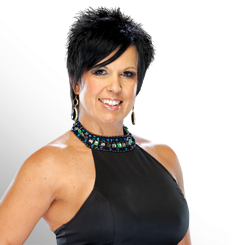 Sometimes, all it takes are two words to polarize an audience. In the case of Vickie Guerrero, those two words are, “Excuse me!” Barking the phrase out to a disinterested audience, Guerrero’s voice rises in pitch and intensity as a chorus of boos attempt to drown her out. This simple act makes her the most reviled managers in the history of WWE.
When the widow of WWE Hall of Famer Eddie Guerrero joined the company in 2007, it was as the assistant to SmackDown General Manager Teddy Long. Few would have imagined that beneath the exterior of this simple, winsome homemaker lurked a cunning animal whose multicolored nails would prove to be claws, hacking and slashing at the fabric of WWE.
Aligning herself with Edge, the villainous Guerrero formed La Familia, a stable designed to overtake SmackDown one match at a time. Enduring scandal after scandal, Vickie was known for romantically fraternizing with the pool of talent on the roster she governed. This has included the likes of The Rated-R Superstar — her estranged husband — Edge, who routinely capitalized on his wife’s position to empower himself and secure a slew of World Title reigns.
Eventually, her devious tactics propelled Guerrero to the position of General Manager of both SmackDown and Raw. Finally in 2009, the WWE Board of Directors demanded Guerrero choose just one show to run, which led The Queen Diva choosing the red-hued Monday night brand the night after The 25th Anniversary of WrestleMania. Only two months later, she stepped down in distress and disgust with the WWE Universe.
After a brief hiatus from WWE in 2009, Vickie returned as the Official Consultant to SmackDown, where she formed a close friendship with Team Lay-Cool (Michelle McCool & Layla) and finally stepped into action for the first time herself. At WrestleMania XXVI, she even adapted a move from her late, great husband’s arsenal, diving from the top rope to execute the “Cougar Splash” on Kelly Kelly.
Guerrero then devoted her services to Dolph Ziggler, who she managed to a brief, yet history-making, one-night World Heavyweight Title reign. Continuing her unwavering support for Ziggler, Guerrero took issue with Raw General Manager AJ Lee forcing The Showoff to defend his Money in the Bank contract against Chris Jericho. Vickie continued to push Lee’s buttons, leading the GM to attack Guerrero.
Vickie finally got her wish, as AJ’s alleged fraternization with talent led to her resignation as Raw GM on Oct. 23. The Queen Diva was then chosen by the WWE Board of Directors as the show’s Managing Supervisor. However, her need to impress Mr. McMahon led her to make a Ladder Match at WWE TLC between Ziggler and the Cenation leader. The snap decision infuriated Ziggler, who confronted Guerrero and accused her of risking his career to make things exciting.
With The Showoff out of the picture, Vickie’s focus is now solely on keeping things on Raw going smoothly. Although she’s drawn the ire of Superstars like WWE Champion The Rock, nothing has stopped Guerrero from achieving her goal of being named permanent General Manager of Raw. She certainly made huge announcements when she revealed that she had secretly negotiated Brock Lesnar’s return to WWE, as well as naming the polarizing Brad Maddox as Assistant to the Managing Supervisor.
Devious, shrewd and willing to use either her brains or her beauty to get what she wants, Vickie’s piercing proclamations and deceitful machinations have made her the go-to target for the WWE Universe’s hatred.