John Cena vs. CM Punk - Winner faces The Rock for the WWE Title at... 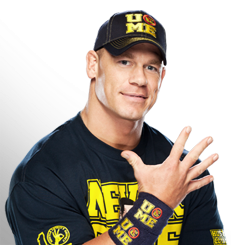 Really, now. Who ever saw John Cena coming? When he debuted on SmackDown in June 2002, he was just a beefy guy in purple trunks. Within a year of his introduction, he transformed into the battle-rapping, chain-wielding “Doctor of Thuganomics.” Now, he’s the biggest star in WWE — but he’s also the most polarizing.
Fans love him or hate him. There’s no middle ground, and that’s the power of John Cena. Whatever you think of The Champ, there’s no denying his actions impact everything and everyone around him. Sure, he has his detractors, and they’re vocal, but Cena is still easily the most admired competitor in WWE, as evidenced by his nine million–plus Facebook followers. Cenation is strong. And its message is spreading. Whether competing in the squared circle, performing in front of the camera or donating time to charitable organizations like Make-A-Wish, The Champ is there.
A product of West Newbury, Mass., Cena discovered sports and weightlifting in his teens. He attended Springfield College, where he earned a degree in exercise physiology and excelled as a Division III All-American offensive lineman. Although he grew up a huge fan of such Superstars as Hulk Hogan and Ultimate Warrior, Cena only seriously considered becoming one himself while working the counter at Gold’s Gym in Venice, Calif. There, a wrestler-in-training encouraged him to enroll in class to learn the ropes. From day one, he was hooked.
A year later, Cena was signed by WWE to a developmental contract. What did he have that others didn’t? A physique that looked as though it were formed from Portland cement, mic skills that would shame a Roman senator, the tireless perseverance of Superman, and a devastating move that could turn even the most cast-iron grapplers into bags of mulch.
Throughout the past decade, Cena has amassed many honors, most notably an amazing 11 WWE Championships and two World Heavyweight Titles. He’s no stranger to struggle — in 2012 alone he lost to The Rock at WrestleMania XXVIII, fell to CM Punk on multiple occasions and became the first Superstar to unsuccessfully cash in a Money in the Bank contract — but the man does not quit.
In 2013, the Cenation leader has displayed his determination, winning the 2013 Royal Rumble Match and going onto to WrestleMania where he defeated The Rock in the main event to win redemption and the WWE Title. His reign has been off to a rough start, thanks to multiple attacks by The Shield and the angry Ryback.
After receiving medical attention following his Last Man Standing Match against Ryback at Extreme Rules, Cena will once again face his dangerous rival in a grueling Three Stages of Hell Match at Payback. In this harrowing bout, the two Superstars will clash in a Lumberjack Match, a Tables Match and, if necessary, an Ambulance Match.
It's a dangerous spot for the Cenation leader to be in, but, rest assured, your WWE Champion will continue charging into battle, equipped with the simple yet resounding mission statement he’s had since day one: hustle, loyalty and respect.