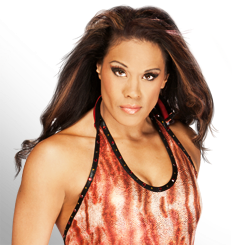 With a father like WWE Hall of Famer “Superfly” Jimmy Snuka, Tamina’s knack for climbing the turnbuckle and punishing her opponents is a nod to the type of dazzling aerial offense her dad made famous.
First aligning herself with Jimmy & Jey Uso, this second-generation competitor made a literal splash during her WWE debut in May 2010, when she led a top rope assault on “the first family of sports-entertainment,” The Hart Dynasty.
Tamina stunned the WWE Universe at Survivor Series 2012 when she ambushed AJ Lee, leaving the spunky Diva decimated and the crowd perplexed. Tamina was back and badder than ever. Although she couldn’t wrest the Divas Title away from reigning champ Kaitlyn at Elimination Chamber, Tamina proved that she is a Diva to fear.
As hard-headed as her legendary father, Tamina refuses to let any defeat thus far hinder her dreams. And if “Superfly’s” legacy is any evidence, the sky is the limit for Tamina.
Sursa: www.wwe.com
Publicat de WWE: WRESTLING, RAW, SMACKDOWN, THE DIVAS la 18:08