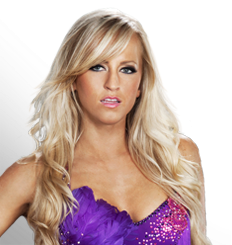 They say behind every great man is a great woman. Given all this, Fandango’s immediate impact in the ring and on pop culture at large should have been no surprise with Summer Rae in his corner.
A devil in a blue dress on the arm of the dancing king, Summer has proven herself to be far more devious than the average Diva. Tangoing at Fandango’s side, this fleet-footed femme fatale has mixed her cutthroat instincts from her days in WWE NXT with her traffic-stopping good looks to become one of the premiere wild cards in the Divas division.
Using her unique blend of beauty and brains, Summer has swung more than one contest in the favor of her boogieing boy toy. She lured Chris Jericho into a sneak attack from Fandango on Raw, and even when she’s not actively interfering in the action, her sultry moves at ringside always provide a ready-made distraction for Fandango’s opponents.
And all this before she’s even had the chance to set foot in the ring to officially compete. Though Summer has yet to ditch the dress and toss on a pair of wrestling boots, the damage she’s done from the sidelines has made the situation more than clear to her fellow Divas (and more than a few Superstars). So watch your step when Summer Rae takes to the floor, because your next move could be your last.