The Bella Twins and The Funkadactyls get into a huge brawl: SmackDown,... 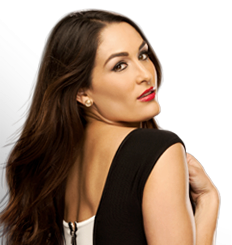 Normally, seeing two equally gorgeous twins requires a night of heavy drinking and some serious beer goggles. But, with the Bellas – Nikki and her sister Brie – the double vision is the real deal.
A self-admitted "tomboy" with a feminine side, Nikki originally planned to play professional soccer until a leg injury ended her career. From there, she followed her twin sister Brie’s lead into WWE.
Unsuccessful in seizing spots in the 2006 WWE Raw Diva Search, the Bellas caught the eyes of execs and soon landed in FCW. Training for the competition they’d soon crush (while male WWE fans formed crushes on them), Nikki and her sibling made their way onto the main roster in 2008 and turned heads whenever they set foot inside the ring.
But don’t be fooled — Nikki is more than just a (really) pretty face. With a dash of “Twin Magic,” Nikki and her sister stirred up the Divas division, culminating with Brie’s Divas Title reign in 2011. Nikki followed with a Divas Championship victory of her own, defeating Beth Phoenix in April 2012. The cunning femme fatales made a lasting mark on the Divas division — even if it meant breaking more than just a heart or two — and after a brief sabbatical from the ring, a return in March 2013 proved that the Bellas still have plenty of twin magic in their collective arsenal. Setting their sites on nemeses The Funkadactyls and the butterfly-encrusted Divas Title, the co-stars of E!’s upcoming series “Total Divas” will settle for nothing less than than total sisterly supremacy in WWE.
Whether stirring up controversy in the locker room area or mixing it up in the ring, The Bella Twins are proof that two is always better than one.