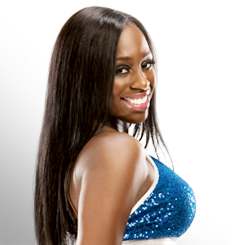 As the second highest cause of whiplash behind car accidents, Naomi first turned heads as a dancer for the NBA's Orlando Magic and hip-hop stars like Flo-Rida. These talents would take her around the world as Naomi performed everywhere from North Korea to Japan to Indonesia.
Despite all that success, Naomi's dance steps couldn’t satisfy her competitive spirit, which is how she found herself as a contestant on WWE NXT. Despite being eliminated in the final week of her season, Naomi soon launched into orbit around Planet Funk.
Accompanying Brodus Clay to the ring while jiving with fellow Diva Cameron, the athletic beauty uses the canvas as her own personal dance floor. The Funkasaurus busts his opponents while the Divas bust a move at ringside.
The beautiful Naomi finally stepped into the spotlight during the WWE TLC Pre-Show when she last eliminated Kaitlyn in the “Santa’s Helper” No. 1 Contender’s Diva Battle Royal. The victory gave the flexible competitor the opportunity to face Eve for the Divas Title later that night during the WWE TLC: Tables, Ladders & Chairs pay-per-view, where, despite an impressive effort, she came up just short.
The Funkadactyl’s agility and athleticism has impressed many in the WWE Universe. She's since teamed with fellow Funkadactyl Cameron to tackle any Divas who try to disrespect the funk, including returning duo The Bella Twins. The fiesty Funkadactyls even landed on "Total Divas," a reality show on the E! network, starring alongside the Bella Twins and Natalya. With her commanding ring presence and incredible athleticism, there's no denying Naomi has arrived.