Mark Henry makes his pay-per-view debut against Jerry "The King" Lawler at... 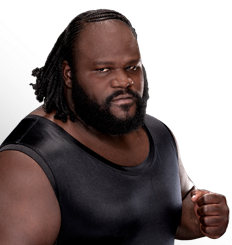 Imagine every bone in your body being crushed into sawdust while you struggle to take a breath. Either you’re about to become python food, or you’re on the business end of Mark Henry’s World’s Strongest Slam.
Henry burst on the scene at the 1992 Summer Olympics in Barcelona, where he competed in weightlifting in the super-heavyweight division. Three years later, at the Pan American Games, Henry captured a gold, silver and bronze medal. Henry’s intimidating size and weightlifting prowess earned the attention of WWE, who signed him in 1996. From there, the new Superstar joined the infamous Nation of Domination, where he established himself as a ruthless and powerful big man — traits he channeled to earn first prize in the 2002 "World's Strongest Man" competition at the Arnold Schwarzenegger Classic. Hence, the moniker he carries today, 15 years after debuting in WWE, where Mark Henry stands at a terrifying peak.
After years in and out of WWE fans’ favor, Henry reached the zenith in 2011, becoming 50 pounds leaner and embracing the huge chip lingering on his shoulder. Capable of feats like folding a frying pan and hoisting an automobile, The World’s Strongest Man unleashed a newly embraced aggression to establish his very own “Hall of Pain” of wounded victims en route to his first-ever World Heavyweight Championship at Night of Champions in September 2011.
Injuries can’t stop him, and neither can Superstars such as Shawn Michaels, The Undertaker, Kane and Big Show — all of whom have been scraped from his boots at some point in his career. The 412-pound behemoth recently reinforced his strongman status at the expense of Ryback, an up-and-coming brute with an insatiable appetite for destruction, when the two Superstars collided at WrestleMania 29.
Now, The World’s Strongest Man has commenced plans for WWE Champion John Cena’s induction into the Hall of Pain. After playing the WWE Universe for fools with a crocodile-teared retirement announcement, Henry turned an embrace from the Cenation leader into a shocking statement regarding the powerhouse’s championship aspirations. Mark Henry will now get his chance to challenge John Cena for the WWE Title at Money in the Bank 2013.
With a wealth of experience, the steady concentration of an ER surgeon, and the temper of Bruce Banner, the scariest thing about Mark Henry isn’t the fact that he’s The World’s Strongest Man — it’s the fact that he’s just getting started.