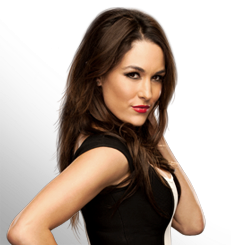 As one-half of the dazzling and devious Bella Twins, Brie debuted on SmackDown in 2008, defeating her first opponent, Victoria, by way of “Twin Magic” — a move in which she and her identical sister, Nikki, secretly switch places during matches. In 2011, the sneaky tactic helped Brie defeat Eve and win her first Divas Championship.
Every bit as cunning as she is cute, this half-Mexican, half-Italian beauty appeared on ECW, WWE NXT, and both SmackDown and Raw, where she teamed up with her doppelgänger in both love and war. The flirtatious pair was romantically linked to The Miz & John Morrison, Daniel Bryan and even Alberto Del Rio.
Still, no matter how many Superstar hearts she has broken in WWE, Brie is always at her best when she’s breaking down Divas in the ring. It seemed as though she and her sister would leave WWE after departing in 2012, but the scheming duo returned in spring 2013, ready to unleash a new wave of “Twin Magic” on anyone who stands in their way, namely The Funkadactyls. Much to Naomi & Cameron’s disdain, the dancing duo’s co-stars on E!’s “Total Divas” remain just as magical as ever.
Determined to continue making statements inside and outside the ring, Brie Bella joins her sister in a doubly troublesome two-woman campaign against the entire Divas locker room.