With Teddy Long cleaning in an apron, John Laurinaitis informs Aksana that...

SmackDown: Aksana shocks GM Theodore Long, with a little help from the...

With more curves than the Monaco Grand Prix, this leather-clad Lithuanian comes to WWE from the world of international bodybuilding competition and fitness modeling. Aksana debuted on the third season of WWE NXT, immediately setting herself apart as a feisty (and flirty) competitor, and showcasing impressive strength and determination. 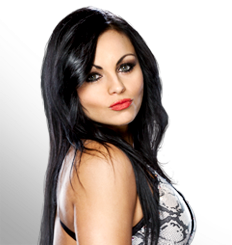 Following her brief marriage to Goldust on NXT, she joined the SmackDown roster in August 2011, where she continues to show an interest in cozying up to the powerful men of the WWE Universe. But it’s one thing to capture the attention and favor of guys like Antonio Cesaro and Teddy Long, and another to realize the ultimate WWE dream by making history as a Divas Champion.
Aksana looked to leave her mark at Survivor Series, attacking Kaitlyn while wearing a blond wig. Kaitlyn foiled the attack, but Aksana showcased her meanstreak, proving she’s more than just arm candy.